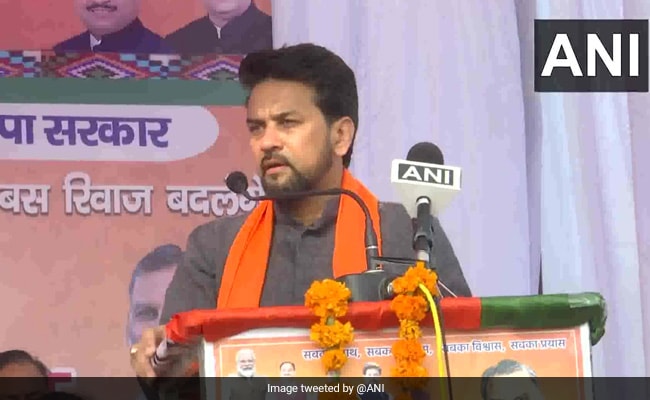 Anurag Thakur said that Kejriwal has been doing ‘politics of lies’ for seven years.

Union Minister Anurag Thakur said on Friday that the Aam Aadmi Party government in Delhi has become synonymous with anarchy and liquor, scams and corruption are its three friends. Campaigning for the BJP ahead of the December 4 municipal corporation elections in Delhi, Union minister Anurag Thakur said Kejriwal has written an unforgettable chapter on “politics of lies” during his seven-year tenure.

Addressing public meetings in the capital’s Dilshad Colony, Welcome Colony, Lalita Park and Patparganj, he said, “The AAP government in Delhi has become synonymous with anarchy. It has three friends – liquor, scam and corruption.” Thakur said that the Aam Aadmi Party made tall claims in Uttar Pradesh and Uttarakhand before the assembly elections, but lost its deposit as well.

“As soon as AAP formed government in Punjab, their health minister had to resign on charges of corruption. Delhi’s health minister is in jail, enjoying massages and having fun,” he was quoted as saying in a statement. are doing.”

The BJP leader said, “From mineral water to massage, all five-star facilities are available in the jail. This can only happen in Kejriwal’s model. Your ministers do corruption and Kejriwal gives them certificates of integrity.”