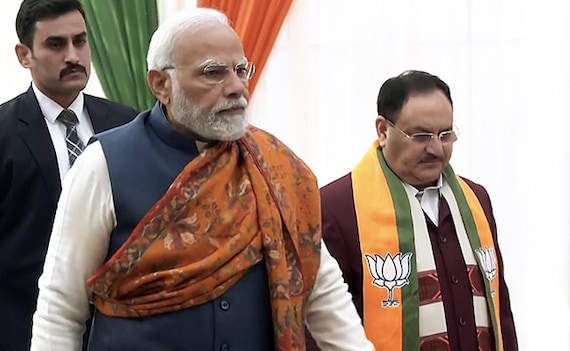 Addressing the party leaders on the last day of the BJP National Executive meeting, Prime Minister Narendra Modi said that the one who resolves creates history. Talking to the media about the Prime Minister’s address today, senior BJP leader and Deputy Chief Minister of Maharashtra Devendra Fadnavis said that PM Modi said in his address that the golden age of India is about to come. The PM also appealed to the workers to build relationships with all parts of the society. The Prime Minister called upon that we have to invest every bit of our energy in the development work. We have to listen to the call of Mother Earth. We have to save mother earth. Regarding the 2024 general elections, the PM said that we have 400 days (till the Lok Sabha elections) and we have to do everything to serve the people. We have to create history.

Devendra Fadnavis told that the Prime Minister has told the party officials that how we have come from bad governance to good governance, we have to convey this message to the youth. We have to connect with all the parts of the society with sensitivity. BJP has to work to change the country and society without worrying about votes. The Prime Minister said that the way we made the save daughter campaign successful, in the same way we will have to run the save earth campaign. There is a need to reduce climate change and the consequences on Mother Earth due to excessive use of fertilizers.

The BJP leader told that the PM said that the Bharatiya Janata Party workers should play a role in the development of aspirational districts as well. Apart from this, all our states should connect emotionally by increasing coordination with each other. Devendra Fadnavis told the media that today’s speech was inspiring as well as a direction guide and was about to show a new path. He said that every moment of your life should be spent in the development story of India. The country can be taken forward only by converting this ‘Amrit Kaal’ into ‘Kartavya Kaal’.

It is noteworthy that today in the BJP’s national executive meeting, the tenure of BJP national president JP Nadda was extended. Nadda has got service extension till June 2024. Home Minister Amit Shah announced this in a press conference. Shah said that all the office bearers unanimously agreed on the extension of Nadda’s service.