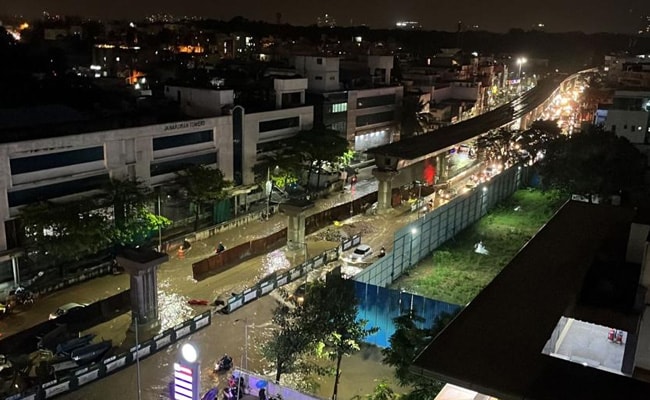 Normal life has been disrupted in Bengaluru due to heavy rains that have continued for three days.

Normal life has been disrupted in Karnataka’s capital Bengaluru due to heavy rain for the last three days. The low-lying areas of the city have been flooded. Roads are uprooted due to rain. On Wednesday, the roads turned into a river due to rain. Vehicles have suffered a lot due to heavy rains in the city. Heavy rains lashed Bengaluru inundated several major roads in the central part of the city, including the IT area of ​​Bellandur.

According to the Meteorological Department, Rajamahal Guttahalli in the northern part of the city recorded 59 mm of rain. The Meteorological Department has issued a yellow alert here for the next three days. Yellow alert is a sign of heavy rain. Due to heavy waterlogging in the low-lying areas of the city, the roads have taken the form of rivers. Due to heavy rains, people are facing big problems in getting out of the house and going to the office.

Parts of the city where global IT companies and domestic start-ups are located have been inundated. It will take several days for the water to drain from here. Roads were blocked and water and power lines in nearby residential areas were blocked due to heavy rains. Tractors have been pressed into service to rescue residents in some posh housing colonies.